The other day, I came across the trailer for an upcoming film called Believe Me, which has this logline: “Desperate, broke, and out of ideas, four college seniors start a fake charity to embezzle money for tuition.”

This film caught my eye because it is being marketed as the anti-faith-based film – a movie made by Christians that tells the kind of story most faith-based filmmakers aren’t willing to tell.  It is a movie that the filmmakers aren’t interested in labeling a “Christian movie”.   In an interview with The Christian Post, director Will Bakke said emphatically, “to be clear, ‘Believe Me’ is not a Christian movie. Christianity is the backdrop to the story, but there’s no hidden agenda or altar call at the end of it.”

When I read this interview, part of me was intrigued.  After all, it sounded like these guys were trying to do exactly what I’ve been challenging the readers of this blog that Christians needed to be doing – making good films that don’t necessarily have “a family-friendly, faith-based, Dove Foundation approved” label slapped onto it.  A film that might actually attract people from outside of the church, and plant a few seeds through excellent storytelling rather than bashing them on the head with didactic on-the-nose preaching.

You know, kind of like Jesus used to do.

But then my cynical nature popped up, and the warning lights started flashing.  After all, what if these guys were playing some sort of game?  What if they were conning us, just like the characters in their film?  What if they were just a group of guys who really weren’t interested in the Christian faith, but who were savvy enough to recognize that there were a LOT of Christians out there who haven’t jumped on the sub-par faith-based film bandwagon?  That there were lots of us looking for an “anti-faith-based” film made by Christians?

What if they just saw that there was money to be made by saying all the right things, but not really believing them?

So, being the good blogger journalist I’m endeavoring to be, I decided to do some research.  I scoured their website, where I saw that these guys were pretty creative and seemed to be a bit on the hipster side with their retro Mad Men suits, but what I didn’t see was anything that confirmed or denied what they were saying in the interviews.

I realized I would have to go a step further, and check out one of their previous films in the hope that I might get some confirmation, one way or the other, which led me to download Riot Studio’s 2010 provocatively-titled documentary, Beware of Christians.

Beware of Christians is a film made by four young college-aged Christians who decide to spend five weeks backpacking across Europe, talking to people and each other about their thoughts on God and the following seven topics: identity, materialism sex/relationships, church, wealth/poverty, media/entertainment, and alcohol.  The film opened with one of my favorite quotes from Brennan Manning, which caught my attention and started me wondering if the Riot Studios boys might be Ragamuffins, too:

“The single greatest cause of atheism today is Christians who acknowledge Jesus with their lips and deny him with their lifestyle.”

It was a good sign, and so I pressed on.

Filmed as if the viewer had just walked up on a conversation in progress, we’re introduced to the four affable young men: Alex, Will, Michael, and Matt, sitting around a table surrounded by darkness, but bathed in a single light.  They are typical early 20-somethings, talking alot, often about nothing at all, but surprisingly sometimes about much, much deeper things.

Through a series of quick shots, they share the reason for this documentary – to get away from all of the influences and distractions of their American Christian lives to try and figure out what Jesus wants from them.

And so they fly off to Europe for five weeks to try and wrangle this out.

This thought came to me pretty early on in the viewing:  When I was in college, why the heck didn’t I think of flying off to Europe with my friends and making it into a documentary?

On the one hand, I appreciated that these four guys were earnestly asking questions, and I appreciated that they seemed willing to dig deeper into the things they’d been taught growing up in the Bible belt.  Too many Christians never take that step, blindly believing what they’re taught.  This makes for flabby, sheep-like Christians who typically end up following a charismatic pastor rather the Good Shepherd.  These misguided sheep also don’t have a problem flocking to poorly made “faith-based” films because the films hit all the right beats that reaffirm their place in the flock.  In Beware, I was impressed both by the questions these four asked, and the fact that they were willing to search – not for something to replace their faith, but for how to be authentic Christians.

On the other hand, it was obvious from the get-go that I was not a part of the intended demographic for this film.  The filmmakers plainly made this film for their peers – churched kids in their late teens or early twenties – not married dads in their mid-forties.  This meant that as I watched the film, I had an increasing awareness that I’m years away from the stage of life of the intended audience, and while I don’t claim to understand everything about the Christian faith, I have already been through much of the same soul-searching, but it’s been a while.

The result?  Half the time I wanted to pat these guys on the back in support of the spiritual journey they were documenting, and the other half the time I wanted to smack them upside the head for their goofiness and general immaturity.  Really?  Dressing like gladiators and fighting with toy swords at The Coliseum?  Stealing your friend’s postcards and lying about it?  Does twenty years of life really make that much of a difference?  I suppose it does.

Perhaps an unintended consequence of watching Beware of Christians was a renewed respect for the folks who are called to minister in campus organizations like Intervarsity, Crusade, or FCA, or those called to teach on university campuses.

To speak to the quality of the film…

This is the second film that Riot Studios produced, and so while the film was reasonably well-cut, and the pacing was fairly brisk, the finished product was still a bit rough and I felt like it could have done with some trimming.  For example, it seemed like they tried to create a little conflict between a couple of the guys with the previously mentioned stolen postcards running gag, but in my opinion, this was a darling that should have been killed.  It didn’t add to the film, and just made Alex and Will look a bit like jerks.  Just let the guy send his postcards!

Overall, I would recommend the film for youth groups or university ministries, as those demographics would probably appreciate the antics of the leads, but more importantly, the film could be a great launching point for discussion about God, life, and the Christian faith.  The quartet does a good job of raising questions, and I was gratified to see that they consistently look for answers in the right place.

And the best part for me is that now I won’t go into Believe Me with any reservations about the spiritual foundation undergirding the filmmakers.  I feel reassured that they will probably be doing their best to produce a well-made film that will contain an important nugget or two of truth, even without a hidden agenda or alter call.  And I hope beyond hope that it will be the anti-faith-based Christian film that I’ve been waiting for.

And considering that Believe Me has Nick Offerman in a supporting role, I think there’s a pretty good chance that it will be just that. 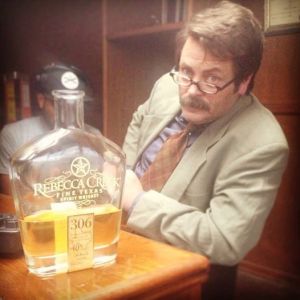