Tonight, I took my kids to our final summer blockbuster of the year before we head back overseas in a week, and Guardians of the Galaxy ended the summer on a great note.  Being that I live in China, I don’t often get to see films on their opening, much less a day before, so this was a real treat for me.

Before I get to the review, I have to ask you, dear reader, if you know the names Jason Heyman or Julie Darmody?  These are the folks who represent Chris Pratt, and they must be pretty proud of themselves at this moment, because Mr. Pratt is on a roll.

First, Pratt has starred as the goofy and lovable Andy Dwyer for years on Parks and Recreation (I like Andy, but I’m more of a Swansonite, myself); then he performs strong supporting roles in such critically acclaimed films as Moneyball and Zero Dark Thirty; Pratt’s next big role was providing the voice of main character Emmet Brickowski in the spring’s uber-popular The Lego Movie; then he won the part of Peter Quill, the lead in this review’s subject film; and finally he took over one of the leading roles in one of next summer’s highly anticipated movies, Jurassic World, after  Josh Brolin left the pic.

Good on you, Chris Pratt, as you seem to be a pretty decent guy.  I wish you all the best in your present and future endeavors.

But now to Guardians of the Galaxy.

I’ve been reading some of the reviews that have been going up for the past couple of days, and was encouraged by the positive responses I was reading.  At the same time, the positive reviews also made me a bit nervous, as they started to build up a film that had previously only moderately gotten my interest.

I mean, I read comics as much as anyone when I was a kid, but the film’s incarnation of the Guardians of the Galaxy came around in the mid 2000’s, when I was living in Kazakhstan and completely out of the loop when it came to comic lore.  When the news came out that Marvel would be making this film, my response may have been a shrug, but I just don’t remember.  I do remember that I just didn’t care very much.

That started to change when the first trailer was released, and I realized that this was going to be a movie that had some interesting characters, and didn’t take itself too seriously (Marvel’s secret formula?).  I didn’t quite get the music from the 1970’s playing in the trailer for a big space movie, but that just made it more intriguing.

But I really started to care when I saw the less-than-stellar summer movie lineup that we were facing.  I remember sitting in China back in early June, looking over the release dates for the summer, thinking, “What a big fat zero of a summer for movies!”  When part IV of a Transformers franchise is the only interesting popcorn flick on the horizon, you know you are in trouble.  And we were, I thought.  I thought so moreso after actually watching the curiously pro-Sino trainwreck that was Transformers: Age of Extinction.

And then I paused as I looked at August 1, and saw that Guardians was coming.  What’s this?  A big summer movie that is not a sequel?  Something original on the skyline?  Something that looks funny and exciting?  A family movie in space?

My interest was piqued.

And so, with a week left on our time in the U.S., I packed up the kids and drove 45 minutes away to Danville, Virginia, for a preview showing of Guardians of the Galaxy.

It was worth it.

Director James Gunn (Super, Slither) opens Guardians with a prologue set in 1981 where we see a young Peter Quill sitting in a hospital waiting room, listening to a walkman play a cassette tape labeled “Awesome Mix #1”, a soundtrack which almost went on to become a character in the film (the sixth Guardian?).  Peter is ushered into the room where his mother lays dying of cancer, and where he’s given a final gift before she dies.  Devastated, Peter runs out of the hospital and is promptly abducted by a massive alien spaceship.

You really don’t have time to wonder about this before we fast forward several years to find a mysterious masked figure making his way across the surface of a desolate alien world.  It is – of course – a grown-up Peter Quill (Pratt), doing his best Indiana Jones in space, taking a mysterious spheric relic from the ruins of an ancient alien structure.  When some obviously bad bad guys show up to steal the sphere that Quill is trying to steal, we get to watch Quill get away in the first of many big set pieces of the film, and this is also when we’re introduced to the fact that this film will have plenty of humor.

It’s still early in the film, so it’s not a big spoiler to say that Quill gets away from the obviously bad bad guys, and then the sphere becomes the central prop in the film to bring together the others who make the title of the film plural:  We have the seemingly cold-hearted living weapon Gamora (Zoe Saldana from Avatar and Star Trek),

Rocket Raccoon (voiced by a fantastic Bradley Cooper), the little talking raccoon who is anything but cute and snuggly;  Drax the Destroyer (WWE wrestler David Bautista) who is hell-bent on revenge against Ronan the Accuser, the one responsible for the death of his family; and finally my family’s personal favorite, the tree creature Groot (Vin Diesel), who manages to communicate so much with only three words and had some of the best facial expressions of a CQI creation in a while.

We go on to spend quite a bit of time watching this group try to become a group, and failing over and over again (Avengers, anyone?).  Initially, they agree to work together to sell the sphere for a huge profit, but they are finally brought together in earnest when the sphere turns out to be much more dangerous than they expected.  The sphere is stolen from them by the aforementioned Ronan the Accuser, who is a maniacal xenophobe chiefly interested in committing genocide on a galactic scale, and they predictably have to learn to work together in a pretty drastic manner to get it back from him before he can begin his reign of destruction.

When we got back into the car and started heading for home, I asked my kids what they liked the most about the movie, and they both agreed that it was funnier than they thought it would be.  I would agree with their assessment.  The film is not the most original, following many expected beats, and not having any huge surprises, but it was fun.  A whole lot of fun.

Pratt does a fantastic job with his character, mastering and mixing humor and a certain gravitas in a way that is a bit surprising in a film such as this.  The script is quite clever, seemlessly inserting 1970’s and early 80’s references into a space opera in believable and humorous ways.   The five main characters are also quite likable, each in their own way, with each bringing their own unique personalities to the table.  For a CGI heavy movie, I found that the special effects didn’t distract me, as they usually do (Hobbit, anyone?).  We did see the film in 3D, but it’s not at all necessary for this film, and it didn’t really add anything to the experience, except for the scene where Groot makes the cool floating lights.

If you’re looking for a summer popcorn movie to redeem the dearth of choices we had this year, a good movie for escaping the reality of crime and wars and disease that we see in the news each day, then Guardians of the Galaxy is a good option for you.  It’s not the best of the recent Marvel movies, but it is in my top five (behind Iron Man and the Avengers).  I also look forward to seeing how the minds orchestrating the future of the studio plan to link this storyline with the earth-based storylines.

Thimblerig’s Verdict:  We recommend that you go have fun seeing Guardians of the Galaxy in 2D.

But before you go to the theater, take a minute and download a copy of my novel, Thimblerig’s Ark!  Available for the next couple of days for the reduced price of $1.99!  Go here to check it out. 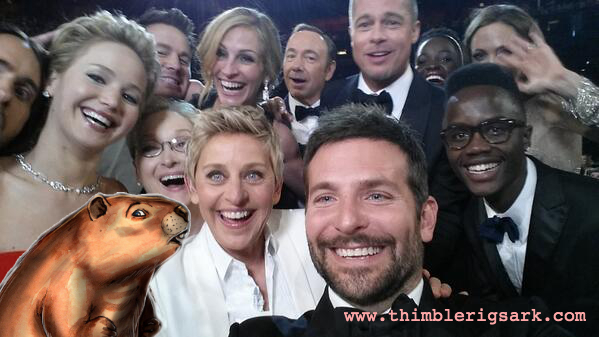