Devon Franklin and the folks at Sony Animation wide release the animated nativity movie The Star on nearly 3,000 screens. When asked about the film, Franklin says:

“We really looked at the scriptures that everyone is familiar with, looked at all the gospels in order to pull the right information about the birth so that when we did the film, those moments would feel authentic…we really tried to honor scripture and that was the number one priority.”

And does the Big Christian Audience respond by running out on opening weekend to support this – a big Hollywood movie put out by a major studio working together with a bunch of Christians – a project that the filmmakers have gone out of their way to “honor scripture” in the making?

The Star only made $10,000,000, giving it the dubious distinction as the worst opening on a Sony Animation film ever, and with a budget of around $20,000,000, I doubt that there were many uncorked bottles of champagne in the Sony offices.

People who study this sort of thing think that The Star will ultimately make money, as it could conceivably play up until Christmas (why didn’t they didn’t take advantage of the Christmas season and release it later, I’ll never know), and it will also make a lot of money in DVD sales, streaming, and other post-theater revenue areas. But, this less-than-stellar (see what I did there?) opening will probably not encourage the big studios to try this again any time soon.

The argument could be made that the Big Christian Audience is just fatigued. After all, The Star was released at the end of a trio of faith-based films (Same Kind of Different as Me, Let There Be Light), and that’s a lot of movies to support. Who’s got the time or money to see so many Christian movies? But this argument does not shine very bright. After all, neither of the other two films performed very well, especially when compared to 2015’s mega smash, War Room. It’s not like the Big Christian Audience emptied out its collective pockets to support Pureflix and Kevin Sorbo, so they got nothing left for the poor animated donkey.

They’re just not showing up.

But here’s the thing. In a few years, some big Hollywood studio will put out their own retelling of a biblical story. They’ll hire a non-Christian to direct it, and the story will be given a non-traditional treatment that won’t jive with the sensibilities of the Big Christian Audience.

And the BCA will immediately jump on their smart phones and share negative articles about the director’s controversial take on the subject. They’ll take to the social media airwaves to complain about it. They’ll threaten boycotts and cry “persecution” and play the victim, because this is what the BCA does.

And a simple, animated donkey will trot into the picture and bray… 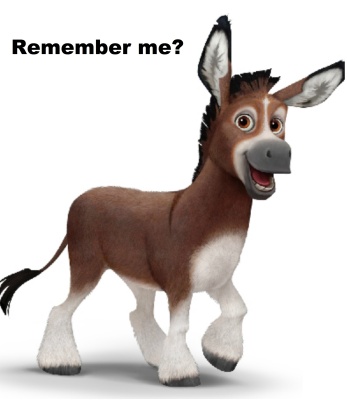