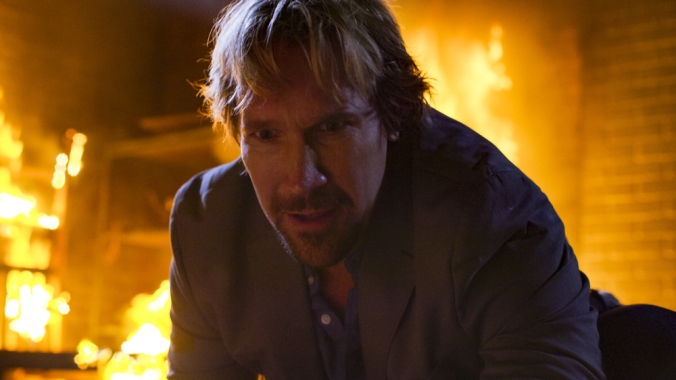 According to Pure Flix founding partner Michael Scott, Pastor Dave: A God’s Not Dead Story will serve as a prequel reboot to the wildly successful faith-based film franchise, and was secretly being filmed at the same time as God’s Not Dead: A Light in Darkness so that it would be ready for a summer 2018 release.

“Audiences have continued to show support and interest in the GOD’S NOT DEAD films and their relatable characters.” Scott told a roomful of excited faith-based film reporters while gesturing at a small white board. “The increasingly diminishing success of these films shows that they’re hungry for more… and to us that meant PREQUEL!”

Pure Flix released the official synopsis of the new film on Easter morning at a special sunrise press conference at Pure Flix’s headquarters in Scottsdale, Arizona. The event was hosted by Scott and Pure Flix co-founder and perennial star David A.R. (pronounced “ARGH”) White. Read it below:

Journey to an Arkansas of the early 1990’s in Pastor Dave: A God’s Not Dead Story, an all-new faith-based adventure with the most beloved pastor in the galaxy. Through a series of daring escapades deep within Arkansas’ dark and dangerous university underworld, Dave meets his mighty future best friend Jude and encounters the notorious atheist Jeffrey Radisson, in a journey that will set the course of one of the God’s Not Dead saga’s most unlikely heroes.

“This movie will be full of Christian pop culture references and nostalgia,” ARGH White told reporters as light from the rising sun streamed through the Pure Flix logo-emblazoned stained glass windows. “We’ve expended great resources to be able to secure the rights to a number of hit CCM acts from the 90’s, including the complete libraries of Stryper, Twila, Petra, Sandi Patti, White Heart, and Billy Sprague. All to help give the film an authentic 90’s Christian subculture vibe.”

When asked who would play the character of the much younger Pastor Dave (played by White in the movies), White simply grinned and said that it would be someone amazing. After being pressed a tiny bit more, White admitted that Pure Flix had recently invested in state-of-the-art motion capture technology that would enable him to play a young Pastor Dave himself.

“I’ve been playing this character for almost half a decade, so really, who knows him better?” White asked, slamming his hand on the desk for emphasis. “And the technology will make me look exactly like I looked when I first broke into the business back in the 1990’s.”

When asked if Kevin Sorbo and Benjamin Onyango would also be reprising their roles, White explained that he would be using the mocap technology to also play the roles of Jude and a young professor Radisson, as well as directing the film. He would also be playing most of the supporting roles.

To emphasize his point, White revealed an exclusive video clip of the upcoming film in which he played all the actors seen on screen.

While not much else is known about the film, White documented his experience making Pastor Dave: A God’s Not Dead Story on Twitter and Instagram throughout production — with everything from set photos to shots of his morning coffee. Thimblerig’s Ark has compiled all of his updates in one post, which you can view here.