Regarding the recent election, you guys really yosted the poodle, didn’t you?

Sorry to be crass, but seriously, media? You gave away billions of dollars worth of free advertising to Donald Trump because you thought he was a big joke, and in the end, the joke was on you. And the irony is that even you couldn’t believe it.

Thanks so much, Media. The 52.8% of the country that didn’t vote for Trump really appreciates that you basically installed him in the office.

The good thing is that you know this, you’ve acknowledged it, and you’ve owned it. We can see examples of this in The New Republic, USA Today, and MSNBC. But you can find it all over the place – stunned media elites, bemoaning the results, and recognizing their culpability in this scenario that the 52.8% [edit: 75.8%] considers to be nightmarish.

But Media, you must understand that owning it is not enough, not by a long shot. No, media, you also need to make atonement.

That’s right. Atonement. In the form of five things we are taking away from you during the next four to eight years of the Trump Administration.

You might want to sit down for this, Media. Because it’s going to hurt.

Ever since Nixon, you guys have not been able stop putting “-gate” at the end of whatever scandal might crop up. We’ve had BillyGate, DebateGate, IranGate, CableGate, FileGate, HairGate, MonicaGate, EmailGate, IntelGate, and even a GateGate! The list goes on and on and on, and Media, it’s time for you to let it go.

We get it! Gates are terrible things! But as your first act of atonement, you will avoid the temptation to label Trump scandals with names like WallGate, MelaniaGate, NepotismGate, Alt-RightGate, PutinGate, or – God forbid – P*ssyGate.

It’s time for some originality, Media.

But that’s only the beginning.

I’m amazed that people complain about the lack of originality in Hollywood, but continue to give the fourth estate a free pass to be as unoriginal as you can be. It all started with Reagonomics, then we had Clintonomics, the Bushonomics, and – silliest sounding of all – Obamanomics.

The madness stops here. As your second act of atonement, you must never refer to the economic policies of Donald Trump as Trumpanomics.

That being said, if you want to use “Trumped-up Trickle Down Economics”, feel free. I don’t think anyone is using it at the moment. 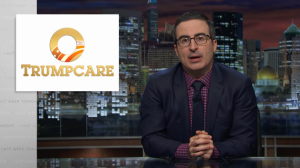 You tried to get this off the ground with Hillary Clinton back in 1993 with Hillarycare, but her healthcare plan flopped. Then, when President Obama announced he was going to push universal healthcare, you quickly grabbed the old nickname and applied it to Obama, and you gave us Obamacare.

And it stops there. Media, after your Election 2016 screwup, you’ve lost the ability to continue this with Trump. John Oliver has already snuck one of these past, but that’s as far as it goes.

As your third act of atonement, you will refrain from dubbing Trump’s new healthcare plan “Trumpcare.” You can call it TrumpHealth, or TrumpMeds, or even InsuriTrump,

But no riffing off Obamacare. You’ve forfeited your right.

Over the course of these upcoming four years, people will undoubtedly come and go from the Trump administration. As your fourth act of atonement, you will refrain from reporting on that story with headlines like, “Bannon, You’re Fired!”

Also, Trump is liable to send our military to fight somewhere, and you are not permitted to report on that story with headlines like, “ISIS, you’re fired!”

You can extrapolate this out to any situation, and apply the same rule.

The use of “You’re Fired” is now fired. Take this off your list of possible headlines. Atonement act #4.

The final act of atonement is to avoid the temptation, as great as it will be, to say that Trump has “trumped” things, or someone else has “trumped” him (with the aforementioned exception of Clinton’s brilliant and erudite “Trumped up trickle down.” That, you may use to your heart’s content). But you must not say things like this:

China Trumps Trump When It Comes to Infrastructure

In conclusion, we want you to know, Media, that we realize that you’re hurting. We know that you are apprehensive about what the next four years holds for people in your line of work, and that things don’t bode well for a transparent Trump administration.

But if you do your job from now on: reporting truth rather than promoting sensationalism; putting aside your own personal convictions and reporting with impartially; and holding everyone’s feet to the fire – Republicans, Democrats, whatever, then we might just start listening to you again.

Atonement is, after all, about reconciliation.

Meanwhile, we hope you’ve learned your lesson from this. And every time you have to stop yourself from using one of the easy choices listed above, we hope that it hurts just a little bit. And we hope the little pain that you feel reminds you of how important it is for you to do your job well.

We’re counting on you, media. Don’t let us down again.

2 thoughts on “Five Things The Media Is Not Allowed To Do, Post-Election”