We’re bringing back an old feature of the blog, Thimblerig’s Three Interesting Things of the Week, where we link to stories from the past few days that Thimblerig finds to be of interest. We hope that you will find them interesting, too!

1. Q&A with Corbin Bernsen and his producing partner as Regent’s movie premieres

Regent University is premiering its first feature-length film, the faith-based romantic comedy “In-Lawfully Yours”, featuring Corbin Bernsen and written by Act One faculty member Sean Gaffney and Robert Kirbyson, and directed by Kirbyson [edited – thanks, Guy]. This is an interesting project, because it’s a low-budget indie film that is forgoing the theatrical route that so many faith-based films attempt, and releasing initially on Netflix.

It’s fascinating to see the variety of methods low-budget faith-based filmmakers are taking to get eyes on their films. For instance, Lifeway films recently bowed its film, The Insanity of God, on 550 screens for one day, and it was briefly the #1 film in per-theater average. In fact, it did well enough that it will have an encore showing on September 19.

Other faith-based films have attemped the wide-release route, and with the exception of a couple of break-out hits (War Room, Miracles from Heaven), most have failed to make back their budgets.

The choice to have In-Lawfully Yours only on Netflix is an interesting one, and is quite possibly demonstrating the wave of the future for the faith-based genre of film.

Meanwhile, reading Bernsen’s thoughts on the subject is pretty interesting, so click on over and read what he has to say.

I’ve been really interested to watch the growth of Pure Flix after the success of God’s Not Dead back in 2014. Previously a middling little independent faith-based film company, they suddenly found themselves sitting on a mound of box office gold when the film wound up pulling in over $100,000,000 in combined box office and home video sales. Since that time, the company has expanded in numerous ways: the Pure Flix home streaming service; the Pure Flix U.S. distribution company (by far the most successful faith-based distributor on the market); and the lesser known Quality Flix, the International Sales and Distribution wing of the company.

The second interesting thing that Thimblerig found this week was a story detailing Pure Flix’s efforts to introduce four films at the Toronto International Film Festival, which could potentially lead to international distribution deals for these four films. The two big pictures Pure Flix is pushing includes the upcoming Hillsong concert documentary, Let Hope Rise, and the drama I’m Not Ashamed, which tells the story of Rachel Joy Scott, one of the victims of the Columbine massacre. 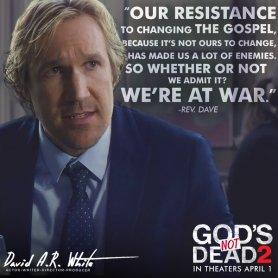 This story interested Thimblerig because it’s a story about Pure Flix, a faith-based film company, on Screendaily.com, a secular film website. And the story is examining Pure Flix’s distribution efforts as if it were any other film company, and not one that is Christian-owned and operated. The story doesn’t contain any belittling, or any disrespect, or any winks or nudges or “know-what-I-means” – it’s business as usual.

But I thought we were at war?

The third interesting thing that Thimblerig found this past week was a story detailing that upcoming Pure Flix film, I’m Not Ashamed.

The film is apparently being released along with some pretty serious ministry efforts, including Pure Flix’s partnership with See You At The Pole and First Priority, all to help mobilize young people to see the film, with the hope of begining a “national movement of youth across the country propelled by the movie.”

This is the truly fascinating part of this faith-based movie push that has been going on for the past couple of years – this mixture of marketing and ministry. Christianity and capitalism.

It works this way: a company like Pure Flix makes a faith-based film and encourages everyone to bring vans full of church and youth groups, which will enable the message of the movie to be seen by thousands, but will also mean thousands of seats sold. The company develops curriculum and ministry resources to help underscore the message of the movie with those thousands, and then sells the curriculum for premium prices (with a few notable exceptions: Captive, 90 Minutes in Heaven, Ben-Hur being three).

This is what continues to flummox me: a faith-based company like Pure Flix has huge financial success, and yet they continue to sell their ministry resources. The Kendrick brothers sell all their resources, too, even if their last movie made over $100,000,000 in combined box office and home video sales.

As an American, I have no problem with this. It’s an example of capitalism at its finest. But as a Christian, it makes me pause. Imagine if Paul had charged the church at Ephesus for his letter? Or if Jesus had charged entry to the Sermon on the Mount? Since when did we become okay with ministry being about profit over being prophetic? Isn’t that at least part of the reason why the Reformation began?

Join Thimblerig next week, when we’ll be back with three new interesting things.