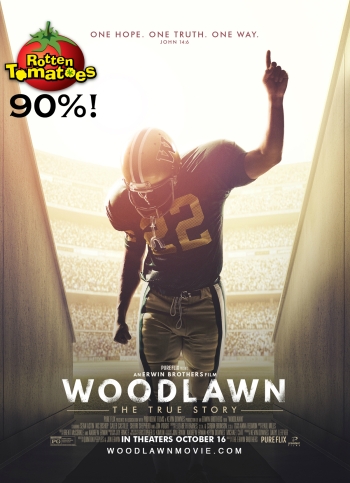 Jon and Andrew Erwin’s Woodlawn just scored another fresh rating on Rotten Tomatoes, the 9th positive review out of ten, giving the film a pretty solid 90% rating, although with an admittedly small sampling of reviews.

As I wrote about before, this sort of thing is unprecedented in the world of Christian-made filmmaking. Phil Vischer’s animated “Jonah: A Veggietales Movie” was the previous high-ranking film of the genre with a 65% from 55 reviews.

And yet, curiously, as of this writing, Woodlawn has only made about 5.5 million in ticket sales in 1,553 theaters. At this time in War Room‘s release, it had made over 15 million in 1,135 theaters. God’s Not Dead had made 12 million in 780 theaters.

The only conclusion I can reach is that compared to War Room and God’s Not Dead, or even the much less overtly Christian faith-based football movie, When The Game Stands Tall, the Big Christian Audience is not supporting Woodlawn.

And I just don’t get it.

Fellow Christian moviegoers, brothers and sisters who make up the casual movie-going target demographic for Christian-made films, I don’t understand you.

But then, when one of your own makes just the sort of film that you’ve been clamoring for, a film that apparently rises above the standard “Christian movie”, a movie that is actually a pretty good movie, with high production values, recognizable and respected actors, and a compelling and relevant true story, what do you do?

The vast majority of you just… stay home. 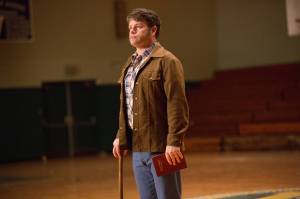 And the craziest thing? Woodlawn is a film that is right in your wheelhouse. Up until now, the audience has been largely Christian, and that audience has given the film a CinemaScore of A+ (the last time a film did this? War Room, which you turned out for in droves). Woodlawn hits all the right beats for a Christian-made film, with faith-based film regular/hobbit/Goonie/Rudy – Sean Astin – sharing the gospel right at the top of the film, the film also features a sympathetic Christian protagonist struggling to be true to his faith and his life’s calling in the face of immense opposition, and it winds up with a feel-good rousing sports-related climax.

This is a film that was made for you, but for some odd reason, you aren’t there for this film.

I don’t get you, brothers and sisters. I really don’t.

And you aren’t showing up to support it.

So, members of the Big Christian Audience, just so you understand what you are doing by not supporting Woodlawn: you are sending Hollywood a clear message that quality filmmaking doesn’t matter to you.

To be honest, at this stage of the game, I’m not sure what matters to you, and I’m one of you! Imagine how perplexed the suits in Hollywood must be!

And it makes me wonder – do you even know what you want?

The real irony is that Woodlawn director, Jon Erwin, defended you when Mom’s Night Out was getting high audience praise but low critical reviews. In an interview with The Blaze, Erwin said, “What you see is a group of underserved people who have not felt appreciated who now have an outlet and a voice and an ability to celebrate themselves,” Erwin said of the fans’ positive reviews. “Hollywood and the mainstream press doesn’t understand these people.”

Hollywood and the mainstream press aren’t the only ones.

But not in a “quality Christian-made film” way. Rather, it will probably interesting in a “more of the same old, same old” kind of way.

Thanks so much for that.

And yes, that was sarcasm.

15 thoughts on “Christian Moviegoers, Do You Even Know What You Want?”