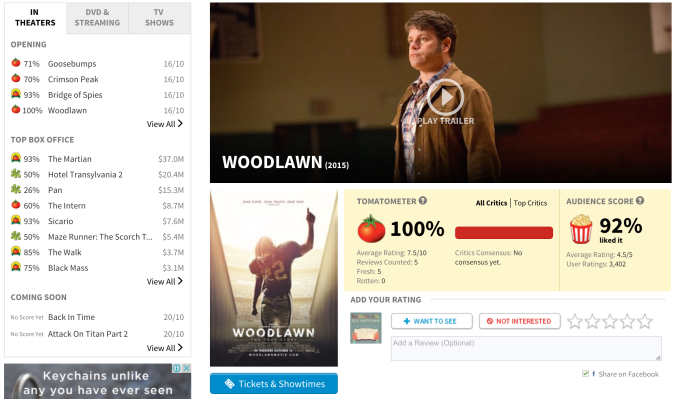 Living in China, I haven’t had the opportunity to see Woodlawn yet, but I can’t help but be impressed by this image. After all, no other Christian-made film has ever scored 100% on Rotten Tomatoes, and most don’t even get to 50%.  Given, it could change as this image was taken after only five reviews, but it’s worth noting that only one of the reviews was written by an openly Christian reviewer, and furthermore, that the L.A. Times was more forgiving than Christianity Today.

So much for the secular critic bias idea.

Regarding the rating, I can’t say I’m surprised, given that the Irwin’s Mom’s Night Out was one of the three Christian-made movies that I liked in 2014. So if anyone could do it, it would be these guys.

It also warrants some thought and discussion, considering the blatant Christian message of the film. What is it about this movie that is making the reviewers be more forgiving about the faith aspect of this story? I can’t help but think that the film is finding success as a good balance of an actual true story, faith, racial issues, and football.

So, things like story and theme have turned out to be as important as the message.

But the big question is: will Woodlawn be the Christian Blockbuster that the Erwins have been shooting for? I don’t think so, at least not based on the box office of the opening weekend. But it does seem like it could be a step in that direction, and it certainly will be an encouragement to other filmmakers of faith.

Hear that, filmmakers?  A Christian-made film can actually achieve a high Rotten Tomatoes score, so you don’t need to be content with the low critic rating and the high audience rating. You can actually shoot for more.

Edit:  After about 24 hours, and we’re up to 7/7 fresh ratings, 6/7 being secular outlets.  The really interesting thing is that none of the reviews are enthusiastically positive, and yet the ratings are still “fresh”. I’m learning a lot about the Rotten Tomatoes system through this experience.

Edit II:  A few days from the writing of this article, and Woodlawn has picked up one more fresh tomato, and the first rotten tomato.  Interesting thing about the rotten review is that the reviewer starts his observations with the following remark:

“The most divisive and poisonous of the recent crop of “faith-based” movies are all based on the premise that Christians are under constant attack from bigoted non-believers. Christian folks just want to keep to themselves and believe in God, but the secular world won’t let them!”

And then he spends a large portion of the review attacking the exclusive nature of the Christian faith as one of the main reasons (along with the “persecution complex”) that he didn’t like Woodlawn. Not the acting, or the cinematography, but the fact that most Christians believe that their faith is The Truth.

Now, I’m not saying that the reviewer is a “bigoted non-believer”, but it is odd that his big beef with the film seems to be more of a beef with a central tenet of the Christian faith, and not so much with the film itself.

Edit III:  Common Sense Media just gave Woodlawn it’s tenth “fresh” rating. Like the others, this new review doesn’t suggest that the movie is perfect, but it does recognize that it is a well-executed film with quality acting. It also treats the overtly Christian aspects of Woodlawn as something to be aware of, but not feared.