A long time ago, in a cinema far, far away…

It is a period of spiritual war… 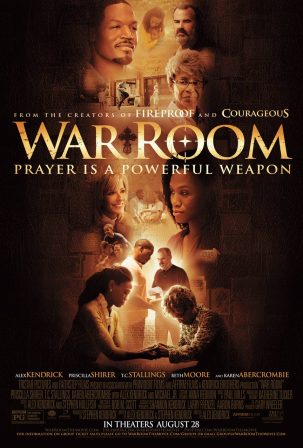 War Room opened up last weekend in 1,100 theaters around the country, and made an impressive 11 million dollars. Not bad for a movie made with a 3 million dollar budget, and the movie’s just getting started.

Made by filmmakers Alex and Stephen Kendrick, who also made Facing the Giants, Courageous and Fireproof, War Room is the latest offering in the burgeoning Christian film industry (read my thoughts on that idea here), and stands to turn a healthy profit, as all Kendrick-made films since Facing the Giants have done, thanks to good grass-roots style marketing and the legions of loyal Christian fans who consistently turn up to support their films.

Christian filmmakers, Kendrick brothers included, have been learning quite a bit from their secular counterparts these past few years – how to make a film look and sound better, how to help actors act better, and even (on the rare occasion) how to write a better screenplay.

But the thing that really stands out? How to turn a profit.

And this is what has gotten the attention of the big boys in Hollywood.

Of course, making money from art is not a new thing for Christians. Back in the days of Bach and his contemporaries, musicians and artists were commissioned by the church to create, giving us beautiful and important work that continues to be cherished today. Locally, churches have been paying artists for ages to minister as organists, choir masters, worship leaders, and praise band members.

And it’s also not a bad thing. “Don’t muzzle the ox while it is treading out the grain,” Paul said in the book of Timothy. In other words, when people work hard, they should be able to enjoy some of the benefits of their labor. In filmmaking, that means if someone makes a movie, and it earns buckets of money, that filmmaker should be able to have a few buckets for themselves to do with as they please – even if the film is being made as a “ministry” or an “outreach”, and not just as typical profit-grabbing entertainment.

Of course, there are more and more potential buckets available for successful films. We have the obvious box office buckets, but if the film has been distributed in the traditional way, the majority of those buckets go back to the studios and distributors. So another option is the bucket of merchandizing.

And there are lots of buckets in movie merchandizing, even with Christian-made films.

Unlike secular movies, where the merchandizing can run the gamut from video games tie-ins to kid’s meals at fast food restaurants, Christian-made movie merchandizing primarily means the creation and selling of what the Christian marketing world calls resources.

What are resources? One kind of resource is the study guide. These are written so that Christians can watch the film with their Sunday school or small group and then engage in a Bible study inspired by the film, and it’s something that is particular to the faith-based film genre. For example, Marvel doesn’t typically mass produce study guides to the MCU movies, nor does J.J. Abrams write study guides for his films, although they’d probably sell if they did.

But resources can also mean many other things, from church campaign kits, books inspired by the film, and original soundtracks featuring favorite CCM artists.

And then there’s the typical kitsch and tchochkes – baseball hats, coffee mugs, t-shirts, notepads, plush dolls, little wooden crosses, and the like. I would imagine secular companies have to be impressed by how effective the Christian Corporate Machine has become at taking films from idea to screen to marketplace.

For example, long before it ever bows onscreen, a film like War Room has been so incredibly well-strategized, planned, marketed, and produced, that I’m surprised the ever-popular Chick-fil-A wasn’t signed on for some product placement.

I can see it now… Ms. Clara goes into her War Room to pray, but when she’s sure nobody’s looking, she pulls out a bag of waffle fries and a white styrofoam cup of sweet iced tea emblazoned with that curly red chicken head…

Yeah, maybe that wouldn’t have worked.

Regardless of how they do what they do, it’s interesting to see how Christian filmmakers have joined their secular counterparts in mastering the business of movie marketing cross promotion and tie-ins.

And do you know who we have to thank for the overabundance of “resources” being produced for Christian-made films? 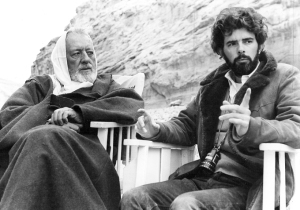 Episode 2:  The Merch Strikes Back

It is a dark time for movie merchandizing…

You read it right, dear reader. I’m making the claim that George Lucas is the reason that every time a new faith-based film opens, the Christian bookstores and websites fill up with all sorts of movie-themed “resources” that help bring in more buckets of money for Christian retailers, publishers, filmmakers, producers, marketers, and everyone else involved in making and promoting Christian-made movies.

Most people under the age of 30 probably don’t realize that prior to Star Wars, movie marketing cross promotion was pretty insignificant. Yes, you had the occasional attempt to take advantage of the buzz created by a movie by making a strange toy version, like the odd “for ages 6 and up” shark game made by Ideal Toys when

Jaws became such a monster hit. Certainly, toys and merchandise and even Christian-produced resources had been made based on movies and television programs, but usually with fairly limited success.

And then, when George Lucas took us to that galaxy far, far away, things changed.

The key is found in one of the biggest blunders in movie studio history. Because Star Wars was seen as such a risk, Lucas made a deal with Twentieth Century Fox that he would take a cut in directing fees in return for having all the rights to licensing and merchandising, and then he sold the toy rights to Kenner for a flat fee of $100,000 per year.

Kenner was so unprepared for the popularity of Star Wars that they didn’t make near enough toys for the demand. If parents wanted to buy their child a new Star Wars toy for Christmas in 1977, they were forced to give the child a voucher for Star Wars toys that would not be manufactured and released for months, and Kenner went on to sell a staggering $100,000,000 worth of Star Wars toys during the first year alone. 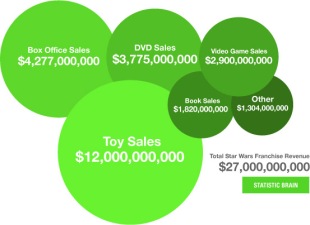 Worth of little plastic action figures and such.

For a movie that nobody had wanted to make.

Since that time, the franchise has gone on to make well over 27 billion dollars, with only about 4.3 billion coming from the movies. That means around 23 billion dollars of revenue has come from merchandizing alone.

And with Lucas’s innocuous little space opera, not only was a merchandizing juggernaut born, but a new way of making movies as well. Suddenly, films started being greenlit based on how much peripheral material could be marketed alongside it, as well as potential box office.

It’s hard to imagine, but there was actually a time when McDonalds and other fast food places didn’t sell Happy Meals connected to movies. In fact, McDonald’s first Happy Meal was an attempt to cash in on the space craze created by Star Wars, and it was based on 1979’s Star Trek: The Motion Picture.

Read this article for more information on the way the Star Wars marketing phenomenon evolved over time, impacting the majority of movies being produced, both then and now, both secular and Christian.

Episode 3: The Return of the Faith-Based Filmmakers

The Kendrick Brothers have returned to their home in Albany, Georgia…

And profit is important, even in the Christian film industry.

But I want to end this blog post with a pretty radical suggestion.

If we must have a Christian film industry, what if that industry did things differently? What if the movers and shakers made the decision to not be swept away by dreams of big box office and profit, like all the other film industries are, and like many of the other Christian media industries seem to be? What could be done, if we determined that we were going to be a counter-industry industry?

What if our Christian film industry – as a whole – pulled a Keith Green?

Keith Green was a very popular but quite radical Christian singer in the 70’s and early 80’s, who famously (or infamously) gave away his records, telling people to pay what they were able, and he required Christian retailers to give away a copy of his cassettes for free with each one they sold, all to help spread the Gospel. Green’s giveaways reportedly sent shockwaves through the Christian music and retail industries at the time, but Green was known to be an uncompromising person when it came to his convictions.

And if today’s successful filmmakers of faith started insisting on doing something similar, imagine the modern day shockwaves!

What if many of those resources developed for movies made on a shoestring budget, but movies that turn out to be popular enough to go on to rake in ten or twenty or even forty-five times that in box office, were just… given away?

The study guides, the bible studies, the church campaign kits, the prayer journals, the baseball hats, and the little wooden crosses all available for whatever potential customers could afford to pay, even if it is nothing at all.

All to help spread the Gospel.

I know Christian producers have to pay salaries, and I’m not suggesting they don’t. I know that Christian filmmakers want to be able to afford to plan out their next projects, and they should certainly do what it takes to do that. I know that some – like the Kendrick brothers – pour much of their film profits back into their home churches, and they should obviously continue to do that as they feel led.

And I know that they all need to put bread on their own tables, and provide for their families, and they certainly shouldn’t be muzzled while they are treading out the grain.

But I’m so frustrated that too many of the other Christian industries appear to be too much industry and not enough Christian. And since the film industry is the youngest of them all, and it’s the industry closest to my heart, why can’t it be the one to change course and do something different, and radical, and refreshing – even if it seems crazy, and unindustrial, and unprofitable?

After all, they thought Luke Skywalker was crazy for switching off his targeting computer when he was making that infamous trench run.

And Luke wound up saving the rebellion.

God bless, and may the force be with you…

Update 1:  I just found out that the producers of the upcoming movie, Captive, are giving away a ton of resources on their website.  All the sorts of materials that are being sold on the War Room website are free for the Captive folks. I was already looking forward to seeing Captive, and now it’s even moreso!  Good job, Captive!

Update 2: I’ve heard some encouraging news.  Apparently, Giving Films – the production company behind the upcoming film, 90 Minutes in Heaven, have committed to giving all the profit they make from the film to charity.

That’s what I’m talking about.  Way to go, Giving Films!