I finally had the opportunity to watch Ragamuffin, David Leo Schultz’s Rich Mullins biopic, over the weekend.  As any regular reader of this blog should know, I’ve been a self-proclaimed ragamuffin for many years now, and so I’ve been highly anticipating this film for months.  This is going to be a very honest and open critique, because I personally appreciate when a review of Thimblerig’s Ark is honest and critical in a positive way.  I am going to do the same for Ragamuffin, in the off chance that the review might make its way back to the filmmakers, in hopes that it might encourage them, and be a benefit in their next cinematic outing.

My review of Ragamuffin can’t begin without my mentioning the enormous amount of respect I have for David Leo Schultz, for the vision, passion, and endurance he brought to this project.  It’s appropriate that Schultz’s film company is called The Color Green, not only because of the Mullins reference, but also because this was a grass roots project from the get-go.  It is inspiring to see what he and his team accomplished, starting from an inspired idea, bringing it to fruition in a very professionally made, beautifully shot film.   You can read a great interview with David here, that gives more depth to the choices he made with this film.

Ragamuffin chronicles the life of Rich Mullins, the outspoken singer/songwriter who worked (reluctantly) in the Christian music industry for several years in the 80’s and 90’s until his untimely death in a jeep accident on September 19, 1997.  With his open and authentic personality, his propensity to speak truth to power, and his bare footed concerts, Mullins made a huge impact on young Christians at that time.  You can read about an encounter I had with Mullins on a previous post here, but suffice it to say that he was a huge influence on my life as well.

I’d rather not take the time to summarize the events of the film, as I’m figuring most people who have read this far have actually seen Ragamuffin.  I’d rather just go ahead and speak specifically to the things that I thought were done well with this film, and the things I think could have done better.  But I want to preface this with the confession that it would have been nearly impossible for me to approach a biopic about Rich Mullins with no preconceptions, and without seeing it as a creative myself, imagining what I would have kept, and what I would have done differently, if I had been making this film.

That being said, let me start with the things I enjoyed about Ragamuffin.

1)  The passion of David Leo Schultz.

I’ve mentioned this already, but I don’t think I can say enough how much admire that Schultz successfully took his vision from his imagination to the screen, against all odds.  He had to convince Rich’s family, his friends, raise the funds, put together the cast and crew, and then he took it out – church by church, just like Rich used to do.  I hope that everything else I say in this review will be seen through that lens of respect and admiration.

2)  The cinematography of Ryan Bodie.

When I think of Rich and his music, one thing I think of is wide open spaces, and this film had no shortage of beautiful shots of windswept wheat fields, dusty plains, and stunning desert vistas.  Another great image is the swinging light bulb which we see first when young Rich has messed up his father’s tractor, and which comes to represent the broken relationship between Rich and his father.   For some reason, this technique made me think of the video for one of my favorite Rich Mullins songs, Hold Me, Jesus.

3)  The Evolution of Awesome God.

I like the way we were teased with the development of this, by far the most well-known of Rich’s songs.  It was a good reminder that as talented a songwriter may be, songs take time, and often will sit at the edge of inspiration, just waiting for the right spark to be pushed over the edge.

4)  The choice of the father/son relationship as the anchor of the film.

You can see threads of this relationship woven through many of Rich’s songs, and considering David Mullin’s involvement in the film (Rich’s brother), I have to presume that the portrayal was fairly accurate, if not perhaps heightened for dramatic effect.  Either way, Rich loved his father, admired his father, longed for his father’s acceptance, but didn’t feel it.  The film handles this nicely, and the resolution of the issue is what enables the film to end with Rich at peace.

5)  The unapologetically real portrayal of a famous Christian man who had very real struggles.

The movie effectively hit three of the points I made in my article, What’s Wrong with Christian Filmmaking.  In that article, I said Christians should be freed to make movies that are not safe, movies that challenge the audience, and movies that ask difficult questions.  Ragamuffin certainly did these things in spades, and David Leo Schultz couldn’t have made an authentic movie about Rich Mullins without them.  I didn’t like seeing Rich smoking and getting drunk, but those struggles were a part of his life and needed to shown or the film wouldn’t have been authentically Rich’s life.  I think this was mostly effective because the filmmakers didn’t  glorify the struggles, and I doubt that anyone walked out of Ragamuffin thinking that they wanted to emulate those parts of Rich’s life.  I’ve struggled with addictions myself, and I found strength and comfort while watching Rich’s struggle.

6.  Rich making it rain in a concert.

I was so glad to see this included.  This was one of my best memories from seeing Rich in a big concert.  And, in the film, it was one of the rare times when Rich actually looked like he was having a blast.  Very, very cool that it was included.

Thus ends the part of the review when I discussed the things I liked.  Now to the things I wished had been different…

Koch did fine with the acting, and progressively well with the singing and playing, but I just couldn’t buy him as Mullins, as much as I wanted to, until the last thirty minutes.  I didn’t – by any stretch of the imagination – expect Schulz to seek out a Mullins doppleganger, but I just couldn’t wrap my brain around the actor playing Rich being this big, buff, handsome man.  On the outside, Rich was incredibly average, which made the deep power of his words and his songs and his story that much more powerful.  Every time I saw Koch’s broad shoulders squeezed into that white t-shirt, I thought he was much better suited to play Superman, not the everyman who was Rich Mullins.

2)  The nearly complete lack of joy.

This was also something I had couldn’t overcome.  My limited experience with Rich Mullins was that he was a man who had his struggles, yes, but he was also a wickedly funny man with an often surprisingly sharp sense of humor.  This was part of the reason why he had young men like myself willing to drop everything to be around him!  Yes, he was wise and deep in his understanding of God.  Yes, he struggled with his personal demons.  But this is also the man who wrote a song referring to God as the maker of noses; who wondered if the little girls giggled when the young Jesus walked past; who considered the story of Rachel and Leah an awfully dirty trick.  This is the man who put the cup game on stage long before Anna Kendrick did it in Pitch Perfect.  The real irony for me in this is that director David Leo Schultz got his start as a comedian, and he somehow made Rich Mullins seem like he was only a tortured soul.  That is perhaps the biggest pity of all to me.

3)  The egocentricity of Rich Mullins.

I want to be careful about how I write this section, because the truth is I didn’t know Rich past the one time I met him with several other guys, but it really bothered me that Rich was so Rich-centric in the film, which made him pretty unlikable.  For example, did Rich really use the occasion of singing in a church to make the public decision that he was going to go to Nashville?  While Rich may have come to Morris’s 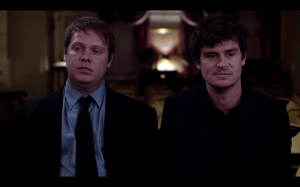 funeral drunk, did he really come back into the room later to talk to the son of the man who died and use the occasion to only talk about himself?  Did Rich really insist that the young men who toured with him inform him on every little move that they made?  The answer to all of these questions might just be an unreserved “YES!  He did all of those things!”  But I have a real difficult time aligning the Rich Mullins of Ragamuffin with the Rich Mullins I came to know through music, interviews, and my one meeting over cake and Koolaid.

These are smaller items, but they did detract from the film for me.  First, I didn’t buy the way the father cussed.  It seemed forced.  Second, Rich’s hair changed in illogical ways throughout the course of the film.  I do know that Rich had several different looks, but this came across more as an issue of when certain scenes were filmed rather than an attempt to convey different looks.  Third, I’m not a fan of narration in film, and I think the film would have been tighter if it had just been straight up narrative.

While I am genuinely happy that this film was made, while I know that it has touched many people in profound ways, and while I think that it was a giant leap forward in many ways for films made by Christians, it just wasn’t the film that I had hoped it would be.

Like I said at the top of this review, I approached this film with so many of my own thoughts about the life of Rich Mullins that David Leo Schultz had a pretty tall order to not disappoint me.  In many ways, this reminds me of when Star Wars: The Phantom Menace came out, and people had nearly twenty years of anticipation built up.  How could Lucas not disappoint?

And so Ragamuffin receives three very solid golden groundhogs for being a risky film that challenges its audience and asks some hard questions. But it loses two golden groundhogs because it is so obviously made for the church that I don’t think it would play well out of the Christian subculture, and – in my opinion – while Rich Mullins’ story is compelling, Ragamuffin could have benefitted from a bit more script doctoring to make the story tighter, especially in the second act, which seemed to drag. 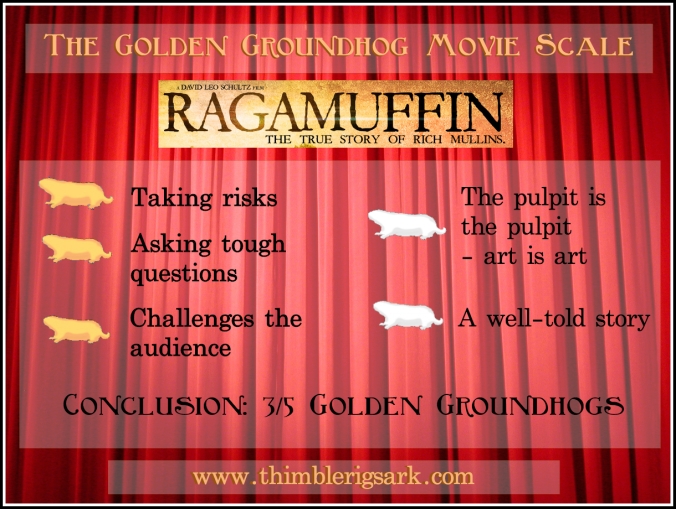 16 thoughts on “A Ragamuffin’s Review of Ragamuffin”