So, Noah has finally premiered, on March 10 in Mexico City and it will apparently play in several different countries before finally opening in the United States on March 28.  When trying to figure out why the film premiered in unlikely Mexico City, some have said that it was a strategic choice because of Mexico’s large Catholic population.

When asked why Mexico City was chosen as the film’s premiere locations, director Darren Aronofsky said,

When the distro asked me where I wanted to have the premiere I said I wanted to have it in Mexico, because I love Mexico. As you know, I have come here many times. In fact, I have been here three times this year.

The economic decision (getting a largely religious audience in your corner from the get-go) seems to make more sense, but I suppose the fact that the director likes the country is as good a reason as any.

And what was Mexico’s response?

The articles linked above show that people generally liked it, but that it was thought to be slow in parts.

There were a few reviewers on hand, and they were apparently not permitted to officially review the film until it is released in the U.S.   Some did do a bit of tweeting, sharing their initial thoughts, which were pretty positive and upbeat.

Noah has a pro-science pro-faith tone, but for the most part, I don’t know why religious viewers would have issues with the adaptation.

I think NOAH is going to be one I end up defending a bunch. It’s odd and it’s flawed but it’s ambitious and thoughtful in ways I loved.

Noah – Aronofsky’s take on biblical story is solid, with some amazing scenes + a focus on character above all. Loved most but not all of it.

And while this is not from Mexico City, I did come across this interesting tweet:

Thornbury is the president of King’s College in NYC, and is – from everything I’ve heard – a pretty solid theologian.

So what does all of this mean?  It means that the plot continues to thicken as we head towards general release.

Now, if I could only get them to post my picture on their Noah fan art website… 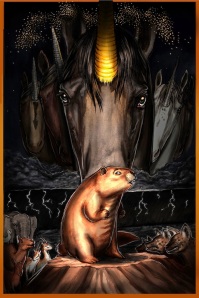 And don’t forget!  Thimblerig’s Ark will be available for free download on March 15 from Amazon!