I’ve been having fun lately getting ready for the release of the new NOAH movie.  Darren Aronofsky’s announcement that he would make a movie based on the Genesis story a few years ago lit the fire for me to finally get serious about my own Noah’s Ark story, so I’m really curious to see what he ends up putting up on the screen.

Now that the studio has started releasing movie posters, I’m enjoying tweaking their efforts a bit to match my own.  I consider my posters to be an homage to their film, and I hope that if they ever see them, that they’ll consider them to be so as well.  Here is the latest poster to be released with a water-logged Russell Crowe standing in the pouring rain.

Looks pretty intense, doesn’t it?  Well, to keep up, I decided to put Thimblerig into Russell’s place, and see how he fared.  Here’s the newest Thimblerig’s Ark poster, with everything but the lens flare. 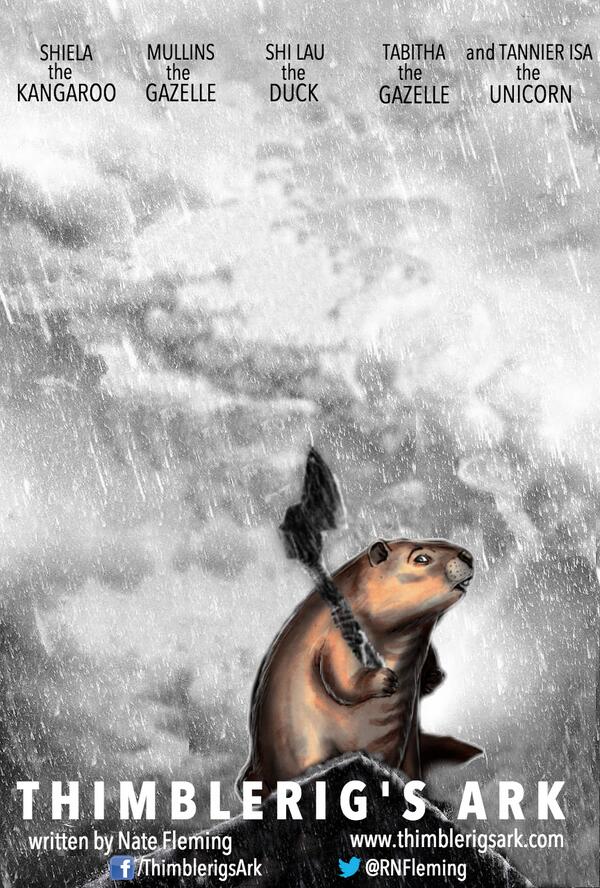 Not bad for a guy with little Photoshop experience, eh?  Now I just wish I could put Thimblerig into the trailer for Noah: The Russell Crowe Movie.

Agency query update:  of the thirty queries I sent out, I’ve had four rejections.  I’m not so concerned by this, as finding a literary agent is like finding a spouse – you have to be at the right place at the right time, and there has to be a bit of magic in the air.  I’m still holding out for the magic.

Meanwhile, I’m also holding out hope that Russell Crowe or Darren Aronofsky might feel so inclined to retweet Thimblerig’s Ark, and get us some much-needed attention.  Come on, guys!  Give the little guy a break!